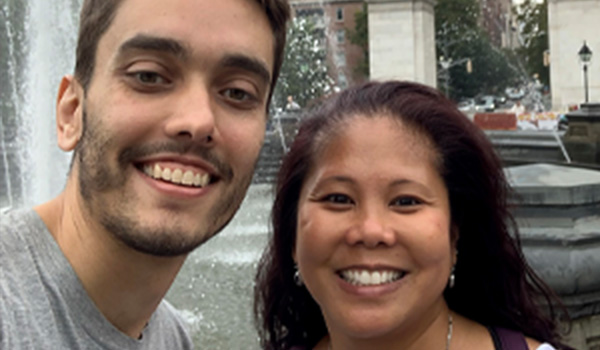 Liver transplant recipient Benjamin Ale-Ebrahim, 28, of Bloomington is a Team Indiana member who’ll be competing in the 2022 Transplant Games of America July 29-Aug. 3 in San Diego. Accompanied by his aunt, Marci, Ale-Ebrahim will compete in a 20K cycling race and bowling.

Benjamin Ale-Ebrahim, 28, of Bloomington, Indiana is a liver transplant recipient. He was diagnosed in high school with Wilson’s disease, a rare genetic disorder when excess copper is stored in various body tissues, including the liver.

“I remember my doctors telling me I had a week to live at one point,” he said. “Facing death as a teenager was definitely a scary experience.”

Ale-Ebrahim received a new liver in 2009 after just one week on the transplant waiting list. He graduated high school with honors and then college.

Today, he’s finishing his doctorate degree at Indiana University and interning with Microsoft.

He’ll be competing in a 20K cycling race and bowling at the games. His aunt, Marci, will travel to San Diego to cheer him on.