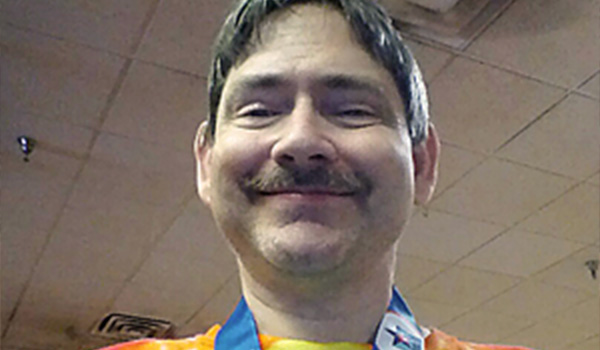 Kidney and pancreas transplant recipient David Jackson, 59, of Elkhart is a Team Indiana member who’ll be competing in the 2022 Transplant Games of America July 29-Aug. 3 in San Diego. Jackson will compete in bowling and poker.

David Jackson, 59, of Elkhart, Indiana underwent a kidney and pancreas transplant in 2002. Over the course of several years following his transplant, he battled numerous health problems, the most serious being amputations of portions of his feet and stage 4 liver cancer.

“I’m excited to go back to the games,” said Jackson, who has represented Team Indiana before. This year, he’ll be competing in bowling and poker. “I don’t go to win any medal. I go to honor my donor.” Jackson’s donor hero was a 21-year-old man, a baseball player who was tragically struck in the back of his neck by a hit ball and suffered an aneurism.

Jackson will celebrate 20 years of living since his transplant while at the games.

“I’ve been bowling for nearly 40 years,” he said. “If I can do it, I figured I would show everyone that anyone can do it.”