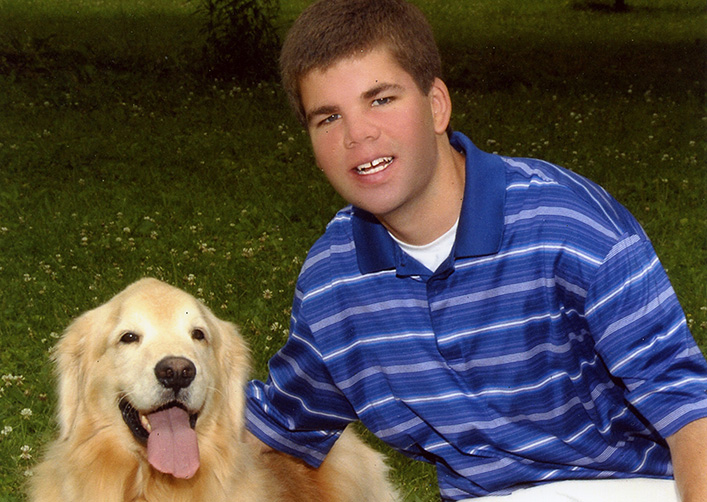 Floragraph on board Donate Life float to celebrate McKenzie Leichtnam’s life, his final act of compassion

CARMEL, Ind. – When McKenzie Leichtnam was born in 1990, doctors quickly determined his heart wasn’t functioning properly. He was diagnosed with hypoplastic left heart syndrome, a condition where one side of his heart didn’t develop as it should have. He needed a heart transplant to survive.

He was put on the national transplant waiting list at just three days old and 10 days later, a donor heart became available. After surgery and two months of recovery, Leichtnam went home to celebrate his first Christmas with his family.

For the next 20 years, Leichtnam lived a normal life. Twice-daily medications, annual biopsies and routine stress tests kept the Carmel, Indiana native’s heart strong. After graduating from Carmel High School, he studied for two years at Vincennes University and was set to transfer to Indiana University to complete his undergraduate degree. But a day after visiting campus with his parents, Leichtnam unexpectedly died in his sleep, just shy of his 21st birthday.

Leichtnam became a tissue donor to heal the lives of many others in need. But his impact did not end there.

His experience as a transplant recipient and his gift of life as a tissue donor inspired his sister, Kelsey Leichtnam, to pay things forward. Today, honoring her brother, his heart donor and the donor’s family, she works as a hospital liaison for Indiana Donor Network, the organization that managed her brother’s gift of life. Her work makes the gift of donation and transplantation possible for others.

“McKenzie’s life was filled with friends, vacations, sporting events and an abundance of love,” she said. “His laugh was infectious. His jokes were hilarious. His love was once in a lifetime.”

Leichtnam will be one of 44 donor heroes who will be honored in January during the 134th annual Rose Parade® in Pasadena, California.

To honor Leichtnam’s final act of compassion, a floragraph was created and will be displayed on the Donate Life Rose Parade® float, which since 2004 has memorialized donor heroes and raised awareness about how critically important organ and tissue donations are in saving lives.

Floragraphs are artistic portraits created with floral materials, including spices, seeds and other organic materials, that cover a digitized photograph of honorees.

“Stories like McKenzie’s ignite Hoosiers and people throughout the country to sign up to become organ and tissue donors and ultimately give the gift of life,” said Kellie Tremain, president and CEO of Indiana Donor Network, the federally designated organ recovery organization that coordinates organ and tissue donation in Indiana and transplantation throughout the U.S. “The Rose Parade float is a fitting tribute to McKenzie’s legacy as a donor hero and his family’s selfless decision to heal lives through tissue donation.”

Rose Parade float theme: ‘Lifting Each Other Up’

The theme of this year’s Donate Life Rose Parade® float is “Lifting Each Other Up.” The float will join dozens of other floats, marching bands, equestrian units and tournament entries that will travel down the streets of Pasadena during the Rose Parade, which will be nationally televised in the U.S. starting at 8 am Jan. 2, 2023, by broadcast partners ABC, NBC, HGTV, Hallmark Channel, Univision and more. For more, visit DonateLifeFloat.org.

A Chinese street dragon will be the centerpiece of the float. In the Chinese culture, dragons symbolize great power and are considered a sign of good fortune and strength. Dragons bring prosperity and abundance to everyone. The colorful dragon weaves through flowering trees, lanterns and fans and will showcase floragraphs honoring donor heroes from throughout the U.S. who gave the gift of life.

The dragon will be supported on poles by living donors and surrounded by organ and tissue recipients. A traditional paifang bridge is featured in the back of the float, with a special message in mandarin that highlights the power of donation and transplantation.

Thousands of individually dedicated roses will also be part of this year’s Donate Life float. These roses will be placed in special pods along the float, sharing personal messages dedicated to those who have given the gift of life to others and recognizing organ recipients, transplant professionals and other honorees.

During the parade, the float will be surrounded by recipients whose lives have been saved and healed through organ and tissue donation.

Despite age or medical history, anyone can sign up to be a donor online at Donate Life Indiana.

Since 1998, Donate Life Indiana has been the state-authorized nonprofit organization responsible for managing the Indiana donor registry. Its mission is to save lives by creating opportunities for all Indiana citizens to sign up on the organization’s official state registry while striving to raise awareness for organ and tissue donation and transplantation through public education. For more, visit Donate Life Indiana online.

Donate Life America is a 501(c)3 not-for-profit alliance of national organizations and state teams across the U.S. committed to increasing organ and tissue donation. It manages and promotes the national brand for donation, Donate Life, and assists Donate Life state divisions and national partners in facilitating high-performing donor registries, developing and executing effective multimedia donor education programs and motivating the American public to register now as organ and tissue donors.